Making of Gielinor at Jagex Studios

Game designers at Jagex have 235 million bosses. That’s the number of registered uses for RuneScape, the world’s most popular free-to-play MMORPG (Massively Multiplayer Online Role-Playing Game). Players vote on what should happen next in Gielinor, the game’s virtual environment, and Jagex artists check the user forums on a daily basis.

Founded in 2001 by brothers Andrew and Paul Gower, Jagex is the largest independent developer and publisher of online games in the United Kingdom with 480 employees, about 150 of whom still work full-time on RuneScape. While the name Jagex actually stands for “Java Games Experts,” the Jagex team has moved on from their early and exclusive use of Java to a current pipeline that makes heavy use of Autodesk 3ds Max software for environments. The team also uses Autodesk Maya for animating characters. 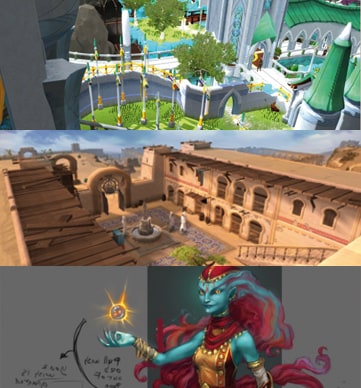 Discover the latest tools and updates for subscribers

Get enhanced workflows between InfraWorks 360 and Civil 3D